By Bruce and MindyMay 3, 2021Bruce, One Day to Wellness

This blog is for anyone battling cancer. Please pass along.

I’ve been on hormone therapy for prostate cancer twice. The first time was almost five years ago. I was treated with radiation to my prostate bed at a cancer center in Florida that came highly recommended. I had six weeks of EBERT radiation to my abdominal lymph nodes based on the doctor’s idea that my PC had begun to spread to said nodes based on his experience. Coupled with this protocol was 12 months of Lupron with prednisone. THIS radiation treatment was my second since being diagnosed in 2011. Almost ten years ago, I had robotic surgery to remove my cancerous prostate in Santa Cruz, CA. Shortly after, my PSA began to rise, and my medical team at the time decided that adjuvant EBERT radiation to my prostate bed would “clean up what was left.” PSA began to rise again shortly after that treatment which indicated that I still had cancer somewhere.

My second round of hormone therapy (HT) with Lupron was coupled with seven months on the cytotoxic drug, Zytigia almost three years ago. After seven months on both drugs, my PSA sank to undetectable again. However, as soon as I discontinued the treatment, my PSA began its usual rise.

Both bouts of HT were coupled with treatments that were targeting a cure. Although I was an emotional wreck for much of the time, I still had hoped (probably unrealistically) that we might eradicate cancer. This hope gave me the motivation to continue the battle and get through the ugly side effects of HT: 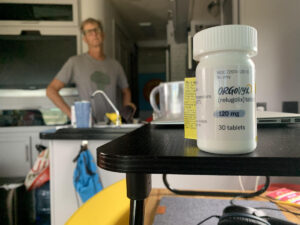 Fast forward to April 21st, and here I sit in my bed in my RV in Texas, having just begun nine months of yet another new HT drug Orgovyx, with the plan of intermittent hormone therapy (9 months on and then hopefully nine months off), to push the cancer back into remission. The elephant in MY room with this plan is, there ain’t nothing else that can really be done. This is not a coupled protocol to try and cure it. It’s nothing more than a stop-gap measure to delay the inevitable spread of the cancer. This is extremely difficult for me emotionally, and it does make me depressed on and off. A recent PSMA scan (I’ve had five, I think) and a biopsy (had at least five) has confirmed cancer between my rectum and bladder and growing. My PSA as of last week was 10.1, having risen from zero over three years ago. My current team at Stanford has informed me that additional radiation is too dangerous due to previous treatments. Surgery is off the table unless I desire a colostomy bag with me for the rest of my life—no friggin way.

Let’s be clear: I HATE hormone therapy. I know I can tolerate it, but I’m an incredibly fit, 63-year-old dude that loves to surf, paddle, bike ride, run my dog and have great sex with my beautiful wife. All of these activities that make me happy are going to be compromised on HT. I’m going to fight it. I have no other choice. I plan to blog on my progress and share it with anyone who wants to read it. I’m going to “double down” on my exercise regime and eating habits for the next nine months and see how my physical and mental state ends up, and I’ll share all of it. I’m on day 2. I’ll keep you posted.

The title of this blog is Chapter 39 because the book I wrote with Mindy on my experience to date ends with Chapter 38.